Want to be an intergalactic bartender...but don't know how?!

Hi everyone
Have you ever seen a drink in a Science Fiction programme which you've always said to yourself "I'd love to try that drink sometime!".
Well your in luck as I've stumbled across a very interesting website that can tell you where you can get recipes to make that prized 'tipple' you've always longed for!!!

But if you'd rather get the recipes in a book then I would recommend that you buy yourself a book called The Intergalactic Bartender!

Jamie found out at Destination Star Trek London 2012 from a Star Trek: Deep Space Nine talk hosted by Casey Briggs (Damar) that the Cardassian drink Kanar was actually made from sugar-free maple syrup!
So if you've got any maple syrup lying around at home then pour a shot of that and you're already on your way to drinking like a Science Fiction character!!! 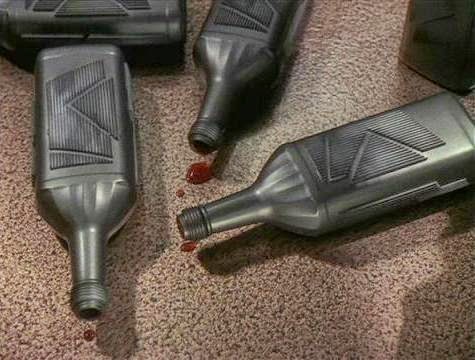 This drink is typically served warm on the Klingon home world (Qo'noS or Kronos) with traditional Klingon food including Gagh, Pipius Claw and Rokeg Blood Pie. I must warn you than when drink Blood Wine you are likely to get drunk pretty easily! As it has double the potency as whisky!!! 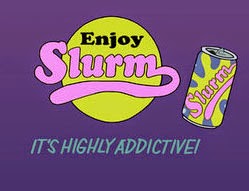 The highly addictive soft drink from the animated show Futurama. In the show Fry gets so addicted to drinking it, that the crew end up winning a golden ticket to go and see the factory where it's produced...and yes it is a homage to Charlie and the chocolate factory! For all those interested the episode is called "Fry and the Slurm Factory" Season 2 Episode 4.

Another potent drink from Star Trek here, this time from the Romulan Empire! As the Federation and Romulan Empire are in an 'uneasy peace' the Federation end up banning Romulan Ale from their borders... so you know it's got to be good!
I think Phil and Jamie are going to 'try' to get me drunk from it at Destination Star Trek London 2014!

Pan Galactic Gargle Blaster- The Hitchhiker's Guide to the Galaxy

Ah...we're finally up to Pan Galactic Gargle Blaster! The effect of drinking it has been described as "having your brains smashed out by a slice of lemon, wrapped round a large gold brick".
At least you'll be able to pay for the medical care you'll need after being hit by it, with the proceeds from selling the gold brick!!!

A drink from the city of Canton on the Higgins' Moon where mud is the major export! This drink is said to have "all the protein, vitamins and carbs of your grandma's best turkey dinner". For the alcoholic version add "15 percent alcohol".

Moloko Plus- The Clockwork Orange

The illegal drink is sold at The Korova Milk Bar. For all those that don't speak Russian korova means cow. In The Clockwork Orange bar's rely on milk with 'special ingredients' like drugs (such as Moloko Plus). 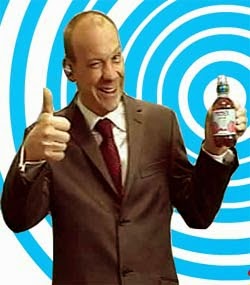 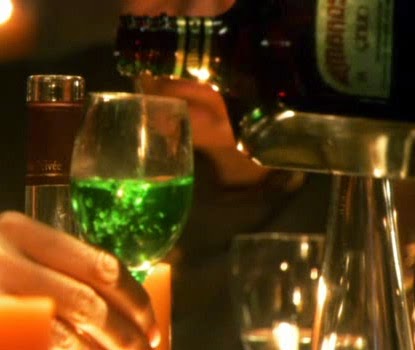 A drink produced in prison labour camps, and distilled for a hundred years. The drink is also mentioned in Greek mythology, because it was said to be the food of the Olympian gods, made out of nectar, conferring immortality on those who ate it. If you want to drink like a god then this is the drink for you!!!

If you want to find out more information please visit:
http://www.thegeektwins.com/2012/08/how-to-make-eight-fake-sci-fi-drinks.html#.U7YWRcIg_cs

And if you would like to purchase The Intergalactic Bartender book then please visit:
http://www.ebay.co.uk/itm/Star-Trek-THE-INTERGALACTIC-BARTENDER-Boldly-Go-/350432155807?pt=LH_DefaultDomain_0&hash=item519762589f
Posted by Simon Cordell at 14:50