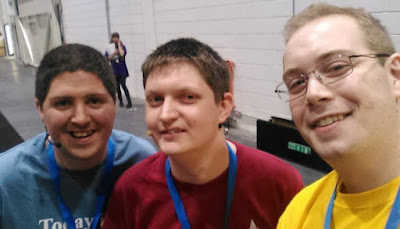 Hi #Treksters
Leading up to the podcast's first Birthday (3rd October 2014), I just wanted to celebrate by taking a look back at the day the podcast launched.
That day we 'dived in' to the world of podcasting head first by covering Media 10's three day extravaganza...Destination Star Trek 3 up at the London Excel centre.
﻿
But on top of our convention covering duties, we were also fortunate enough to host a Fan Panel about the Borg on that day. Where we asked the question: 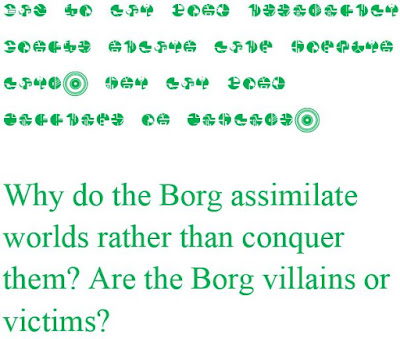 As it was the centrepiece of that day (and of the whole event) for us. I wanted it to be the main focus of this blog post as well.
To see whether I think looking retrospectively back on it, if it (as John & Ken from the Mission Log podcast say) "still holds up" one year on?! 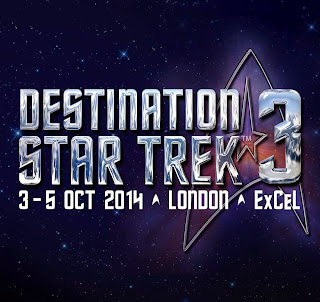 Before I start going into the what we said at DST3, I would just like to take a moment to blow your mind!
Something you may not know, is that originally the topic was going to be our third Teaser Episode. But we had to replace it, as we were covering it in our Fan Panel at DST3.
So
As we didn't know (at the time) whether we could obtain a recording of our DST3 Fan Panel. So we pre-recorded a version before we attended the convention!
Meaning that somewhere in our 'Lost Files' is an unaired version of our Borg topic!!!
Because we recorded that, I think we had a reasonably good idea what sort of things we were say up on stage. 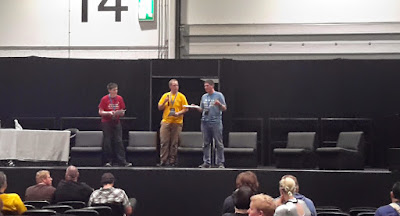 This meant that when we finally got there, gave the impression that the topic was scripted. Which is partly true, as I had created some sub-topics for the Fan Panel to explore!
I think this only happened as we'd never done anything like it before...and trust me in that situation it's very difficult to plan for something you've only witnessed at previous conventions.
That being said, if we were to do the topic again. I would definitely stand by that decision, as I would rather be prepared (and organised). Than being the complete opposite, and ending up standing on stage looking like compete lemons!
This leads me nicely into something you won't be able to pick up from the recording, and is kind of related to my last point!
As when we stood up on stage presenting our Fan Panel, I think the nerves got to us...as we stood in the same places throughout.
Giving us the appearance of novices and amateurs, making us look (unfortunately) like complete lemons!
Because of our experience at DST3 I think we're going to be more confident and more...well animated!!!
One source I wish had existed last year is the video featured above from the (amazing) Trekspertise YouTube channel.
As it discusses (at length) the 'known' canon history of the Borg, which could have come in an awful lot of help when it came to deciding what were going to talk about. 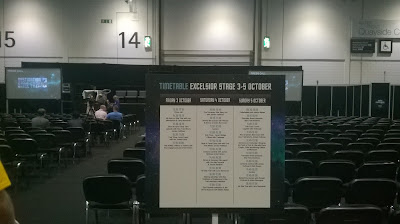 Something else I remember listening back to the recording.
Is that after we'd finished we were saying to each other that we thought the Excelsior Stage had a problem with feedback. As we couldn't really hear what an audience member was saying (or asking) us. I'm hoping this will explain why in some cases our replies were a bit vague!
Fortunately the problem doesn't come across in the recording, mainly due to the fact that my Dictaphone was linked up to sound desk. Which transmitted the sound directly from the microphones straight into my Dictaphone! 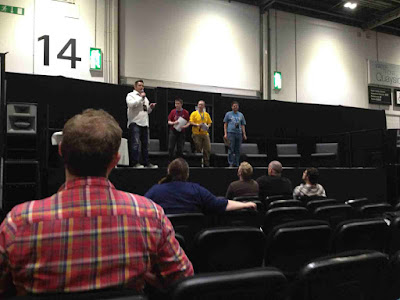 We didn't do the Fan Panel, solely on our own...as we had our 'Honouree' member of the podcast Neil Green acting as our host.
Because he played such a crucial role at DST3 for us I wanted to hear Neil's thoughts on our Fan Panel also. 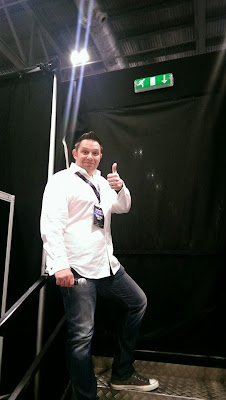 Here is what Neil thought of our efforts:
It was in August 2014 that I was asked to take The Engage Podcast under my wing.
After all, I was going to be presenting their talk on stage, I had experience of hosting other talks, and I was going to be one of two main comperes for the entire weekend in October 2014.
Suzy from Media 10 gave me their contact details, and Sam from the Trekkie Girls gave mine to Simon, Jamie and Phil. It wasn’t long after details had been given out that Simon, in his usual excited to be involved manner, and contacted me via email.

Many emails and phone calls were swapped over the coming weeks and even a few failed skype attempts. We went over and over the talk, who should stand where, should people be able to ask questions, who will say what, every minute detail! This type of stuff doesn’t create itself you know?

The third of October had arrived. We had arranged to meet on one of the outside balconies of the Excel to make our very first contact. However, due to the amount of phone calls and emails we had ping ponged across the cosmos, I knew the guys already. I knew what they were capable of even though we had never met.

I had only just enough time to arrive from my train from Derby to St Pancras and hot foot it across London to the Excel, get changed and make contact with Simon, Jamie and Phil. I only had a limited amount of time, I had to get back to introduce a viewing of Star Trek the Wrath of Khan. Time was against us so I ran from the organiser’s office to the meeting place. The guys were already emblazoned in their very own Engage Podcast uniforms, (their t-shirts!). Hellos were made and we quickly got into discussion on what will happen during their talk. But, there really was no need for any of this! The guys knew what they had to do, they knew what was expected of them, and I knew they could do it. You don’t have constant contact with people and not learn anything about them!

Here’s your cheesy movie bit…
The time had arrived, three boys walked onto the Excelsior Stage, but, walked off as men. Good eh? But, they did! They really did. It takes, for want of a better analogy, huge balls, to be able to get up onto a stage and deliver an hour of information and entertainment and hope to get some audience participation at an event that pulls in 30,000 people over the weekend. And they deserved everything that came from it afterwards. Interviews on other people’s podcasts, the radio, being able to perform at other shows and events. If you don’t have what it takes to take that initial plunge into the murky depths, then you’ll never find out what you’re capable of.

So, what have you learnt from this?
Well, I hope you now have a better appreciation of how much work goes into something that you’ll sit down and look at for an hour. But, you should have also learnt that if it wasn’t for three guys from the south, getting together as friends and saying “you know what we should do…” you wouldn’t have things like this at conventions. It’s a special breed of fan, which I am happy to be part of, to be able to bring you some of the entertainment at these events. Without them, there is no convention.

Neil green is STILL available for all your TV / Sci-Fi related presenting needs.
So in answer to my original question of does the Fan Panel "still hold up" one year on?!
I think my answer has to be a definite yes!

As it was our first major convention experience I don't think we did a particularly bad job...but I think there is room for us to make improvements for our future convention appearances (talks and Fan Panels).

Looking forward to the future, the next convention we're really excited to be attending (and covering) will be the fan run First Contact Day 2016 (FCD 2016) convention up in Telford next April from Friday the 1st to Sunday the 3rd!

Where we will be one of the (six) Social Media Providers for the event alongside the Trekkie Girls and The Original TiT (Trekkie in Training), Some Kind of Star Trek, Star Trek Risa, Geek Apocalypse, TREKZONE.org and Visionary Trek!!!


If you'd like to make your own decision...why not listen back to our DST3 Part 1 episode, where there is a recording of our Fan Panel!
I'm also pleased to announce that, in the not so distant future Daniel Houston (@TheeeRealBigDan on Twitter) will be 'joining our blogging rankings' as our "Guest Blogger"!
Hoping to 'learn the ropes', once he's confident enough to go it alone he's planning on setting up his own fantastic blog!!!

This is Simon from The Engage Podcast signing out!
Posted by Simon Cordell at 15:48 No comments: