Hi #Treksters
Seeing as I released our latest Podcast Schedule for this year at the beginning of the month (Podcast Schedule 2016)!
I thought I would write a fun blog post, asking a question we've all thought at one time or another:

Is Captain Jean-Luc Picard more English than French?!
This a question I would like to 'attempt' at answering, as many of Picard's hobbies and pastimes can be considered typically French or English (based on worldwide stereotypes).
Which may (or may not) be true...although that stereotype will be perceived as being true by someone located elsewhere in the world.

The way I'm going to answer the question is by talking about one of Jean-Luc's favourite pastimes in turn, by comparing it to modern day worldwide stereotypes associated with France and England.

In order to establish just how 'traditionally' French or 'traditionally' English that activity maybe, which ever country ends up with more hobbies determines which country I think Captain Picard is 'really' from!
Ultimately, choosing a country (out of the two) most famous for that activity. As ever I mean this in good humour...and just as a bit of fun!

I really don't think I've explained that well...but you'll soon see what I'm on about!!!
Archaeology 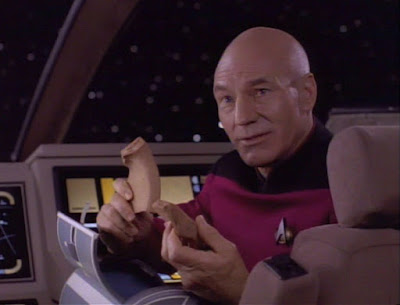 Picard's first hobby I'm going to look at is something which also interests me a great deal...archaeology.
Captain Picard has shown a lifelong interest in archaeology stemming back to his Starfleet Academy days, which we've only been able to get mere glimpses at during the series.

His interest is in no small part owed back to his academy Archaeology Professor Richard Galen (a noted archaeologist of the 24th Century) .
The professor became a mentor (and surrogate father) to the young Academy graduate making it a real passion in Picard's life.

Archaeology is the study of human activity (from the past) through the recovery (and analysis) of the objects (and things), which make up the material culture our ancestors had.
The archaeological record consists of the artefacts, architecture, biofacts, ecofacts, and cultural landscapes they lived with day to day.

The study can be considered both a social science and a branch of the humanities. Depending on which country your from!
Speaking of which in England, archaeology is considered to be covered under the 'History' banner. Whereas over the channel in France it is enveloped under the 'Geology' banner!
Differences aside, both countries have discovered some amazing things about our ancestors.

Because of this I think that neither country has made more advances in archaeology than the other (France & England) making the 'archaeology' round a DRAW!


Drinking wine
﻿
I know 'drinking wine' isn't strictly a hobby, but it's still something Captain Picard indulges in every now and then. In my mind (at least) making it a pastime!
Although it would strange if wine didn't come into the equation...somewhere along the line!

Mainly because its 'in his blood', considering his father (Maurice Picard) and now brother (Robert Picard) produce wine in the Picard family vineyard (Chateau Picard).

I'm sure I don't need to 'teach' anyone about what wine is, and where it comes from...but as a formality I'm going to do it anyway!
Wine, is obviously an alcoholic drink produced by fermenting grapes (and other fruits).
Unlike the other fruits you don't need to add in other ingredients (such as enzymes, sugars, water, acids, water, or other nutrients) when your fermenting grapes.
Yeast is instead added, so that it consumes the natural sugars in the grapes converting them into ethanol and carbon dioxide.
Its variations of this basic process (using different varieties of grapes and strains of yeasts), which yield (and produce) the different styles of wines we're use to!

When I think of vineyards and the wine it contains my thoughts don't immediately think of England. Although, I've got admit that these days England is become more and more well known for producing good quality wine (not that I drink it!) and our version of champagne...which in our quaint little way have called 'English sparkling wine'.
Which kind of in a way, explains why this 'drinking wine' round has got to go to one country FRANCE! 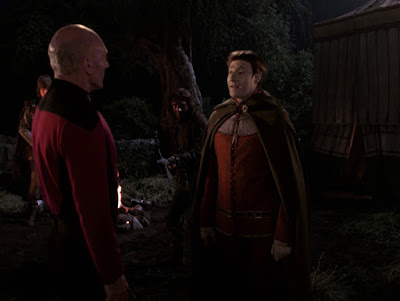 Picard's next interest I'm going to discuss is revolves around the worlds most famous playwrights... William Shakespeare (Wikipedia & Memory Alpha)!

Although the Star Trek franchise has always used a lot of different elements from Shakespeare's works in it's fifty year history (at the time that I write it).
But it is the captain of the Enterprise-D, who is probably most well known for reading (and reciting) Shakespeare's work on a regular basis.

Unlike before his interest in the bard is most obvious in this Ready Room, where he keeps a copy of The Globe Illustrated Shakespeare: The Complete Works on display.

Just like the last round I don't think it's entirely necessary...but here's a brief description of who William Shakespeare was!
He was a poet, playwright (and actor) widely regarded as the greatest writer in the English language...and as the world's pre-eminent dramatist. Shakespeare is also often called England's national poet, and referred to as the "Bard of Avon".
A man responsible for (including collaborations) 38 plays, 154 sonnets, 2 long narrative poems, and a few over verses (some of uncertain authorship). His plays have been translated into every major language, and are performed more often than those of any other playwright!

After the last round, and the paragraph above. I think we all know which country has got to be awarded the 'reading Shakespeare' round...ENGLAND!

Painting
﻿
The next round I'm going to talk about is the 'painting' round, which I think (just like the rest) is self explanatory!

In a similar vein a lot of different Star Trek characters over the years...but Picard is one of those people you'd expect to paint considering his other hobbies!
Which I suppose is all down to excellent writing, and fantastic character development!!!

Although we only see Captain Picard painting on just the one occasion (in a pre-title sequence scene). You get the impression that Jean-Luc is quite a keen amateur artist.
Even though that scene's only a snapshot into life aboard, you get the feeling that Captain Picard's a regular visitor to the Enterprise-D's "painting club"?!

Yeah, normally at this point I'd write down a definition of "what painting is?". But I've tried...and I think this ('painting') definition has found my limit on what's too stupid to even be written down!
So your welcome people!!!

Just for reference
As we all know painting is the practice of applying paint (but also pigment, colour or other mediums) to a surface or support base (normally a canvas).
This commonly applied to the canvas with a brush or other implements (such as knives, sponges, and airbrushes).

I think it's fair to say that this round is a close run thing, as both countries have got a long illustrious history of famous painters (and artists). So I think it could quite easily have ended up being another round with a draw.
Although, I think that one country pips the other by 'a narrow margin'....meaning that the 'painting' round has to be awarded to...FRANCE!


﻿Drinking tea
﻿
Moving on to the next round, we are now going to talk about Picard's most famous drink to sip tea. Although I think Captain Picard's catchphrase "Tea, Earl Grey, Hot" sounds better!

Just like before (with the 'drinking wine' round) I'm going to stretch the definition of a hobby to also include drinking tea...as Jean-Luc Picard is well known for drinking tea like a champ!!!

Tea is obviously a non-alcoholic drink produced by pouring hot or boiling water over cured leaves of Camellia sinensis (an evergreen shrub). Which is the second most popular drink in the world (after water).
The different varieties of tea are created by blending ingredients together, to develop a unique flavour.
For example Picard's favourite blend of tea (Earl Grey) is a produced by infusing black tea with either citrus or bergamot peel.

Considering that it's a well known worldwide stereotype that the "English love their tea" (a true stereotype). I think I have no other option than to award the 'drinking tea' round to ENGLAND!


Fencing
﻿
Moving on to the penultimate round of this blog post, we are now going to discuss an occasional hobby of Captain Picard...fencing (Wikipedia & Memory Alpha)!
Just like before (in the 'painting' round), I'm going to infer that Picard fences more regularly than we see in the show (seen in a couple of scenes).
Becoming quite a capable fencer against his main competition on the ship, Guinan and Lieutenant Dean.

Fencing (also known as Olympic fencing) is a competitive sport, which emerged in the 19th century. As the Italian school modified the classical fencing technique, before later being refined by the French school.
In modern day fencing three weapons can be used, meaning that the sport is subdivided into the respective three competitive scenes. Most (but not all) competitive fencers choose to specialise in one of these only.
They are (the most famous) foil (which Picard uses), sabre (spelt "saber" in the United States) and épée. As you can imagine, each form of fencing has different rules to accommodate the weapon being using. If you'd like to find out more please click on the links above!
As previously mentioned competitive fencing is now one of five activities (along with athletics, cycling, swimming, and gymnastics) which have been featured in every modern Olympic Games.

So in light of the origins of the sport (and my personal perceptions of the sport), I think I have no other option than to award the 'fencing' round to FRANCE!
﻿
Horse riding
The final round of this particular blog post, is also going to talk about an occasional interest Captain Picard indulged in every now and then...equestrianism (Wikipedia & Memory Alpha)!

Although we only see Picard riding a horse (a Holodeck horse) on just the one occasion in the series (in a couple of small scenes)...and briefly in Star Trek: Generations (when he's in the Nexus).

It's referenced ever so often, that you get the impression that the Captain's quite a keen rider!
Once again, I'm going to infer that at every opportunity Captain Picard gets to ride a horse he takes it...so that he can escape the confides of the ship!!!

Equestrianism, or riding, horseback riding (in America) or horse riding (in England) as it's more often known as refers to the ability to ride, drive, steeplechase or vault with a horse.
This broad description includes the use of horses for competitive sport, transportation, recreational activities, cultural or artistic reasons, and practical working purposes.

I think equestrianism is an outdoor pursuit enjoyed thoroughly in both countries making the 'equestrianism round' a DRAW!

So in conclusion I believe that Picard is French...although he does have some English tendencies.

A side affect caused by the formation of the World Government (United Earth) in 2150, as it ‘blurs’ the borders between countries.
Which I think poses the question; in what form has national identity (on Earth) taken by the 24th Century?!

Something I'm afraid is a question left for another day, for another blog post (or episode)!

This is Simon from The Engage Podcast signing out!
﻿
Archaeology- both
Wine- French
Shakespeare- English
Painting- French
Tea- English
Fencing- French
Equestrianism- both﻿
Posted by Simon Cordell at 15:30