Antibiotics resistance chosen as the winner of the Longitude Prize

Hi Everyone
On Wednesday the BBC announced that antibiotics resistance was the winning area of research after a public vote. Scientists will be tasked with trying to "solve" a specific problem around this issue. Making us 'hopefully' a step closer to the kind of healthcare we see in Star Trek!
The topic won against other serious problems such as:
Although they didn't get selected, the other topics have been put into the spotlight. They are likely to be researched and studied in more depth, in the hopes of being solved in the near future.

The competition is based on the 'original' Longitude Prize from 1714, which was won by John Harrison (fortunately not Khan Noonien Singh by another name!). Harrison was a clockmaker from Yorkshire, who solved the biggest problem of the 18th century... navigation.
No one was able to determine a ship's longitude at sea, making mistakes a daily occurrence, which put lives at risk. So in response the British Government set up the Longitude Prize in order to find a solution. With a £20,000 pounds prize set aside, the British Government opened the competition to all budding inventors and members of the public.
Navigation in 18th century was quite complicated as sailors required two clocks. One was set each day (using the height of the sun in the sky), while the second clock did the same job back at port.
The problem with this system is that the clock on board the ship, would get damaged due to the conditions at sea. The mechanisms couldn't handle the strain from the humidity and temperature changes at sea, or the pitch and roll of the oceans. John Harrison solved the problem by creating a chronometer that overcame these problems which won him the prize money. 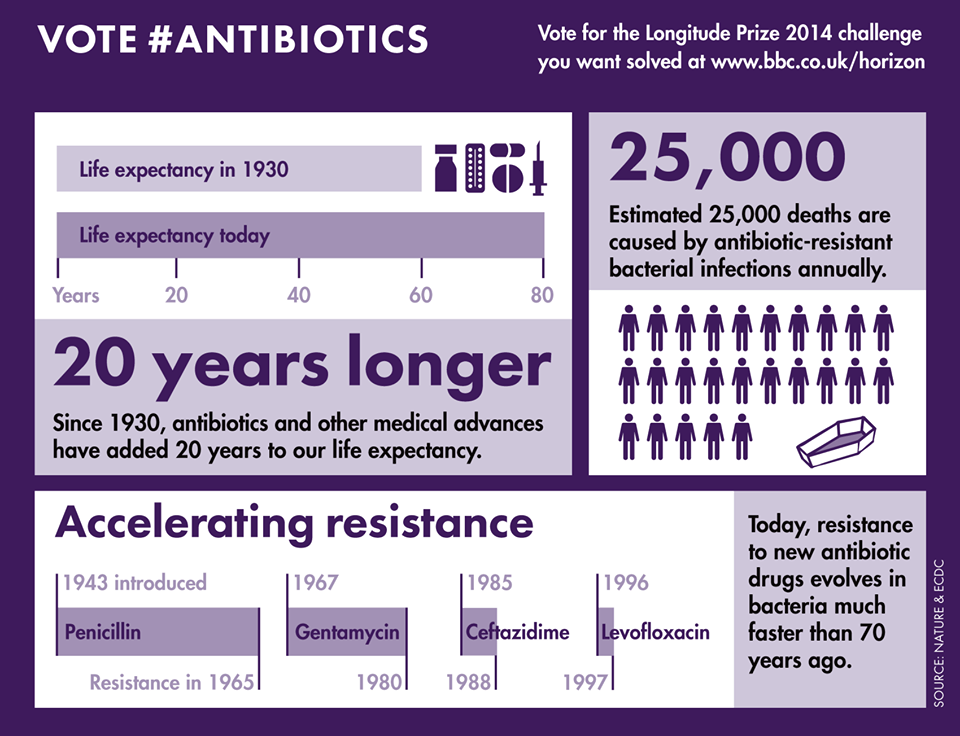 Moving forward to the 2014 Longitude Prize, Nesta and the government funded Technology Strategy Board are looking to award £10 million pounds prize money to anyone who can find a way of producing a cost-effective, accurate, rapid and easy-to-use test for bacterial infections. That will allow health professionals worldwide to administer the right antibiotics at the right time.
Antibiotics resistance is a major problem in today's society, as antibiotics and countless drugs are at the heart of our modern medicine. It's because of that success is why we're in this situation, making it ever more important to create new antibiotics. The World Health Organisation has warned that "many common infections will no longer have a cure and, once again, could kill unabated".

Can you solve one of biggest problems of the 21st century!
Have you got a solution that can save countless lives?
If you have then register your interest at:
http://www.longitudeprize.org/
Posted by Simon Cordell at 19:14