Hi everyone! This week we will be warping back into my own past and exploring my sci-fi background, my own little Memory Alpha if you will! This is to give you a sense of where my love of sci-fi comes from as it continues to grow, with my journey still continuing today.This is in the form of TV shows and movies I have seen. So without further ado lets get stuck in!

My first taste of sci-fi as a kid when I was nine years old is owed to Star Wars. More specifically Episode 1: The Phatom Menace.

I went to see it with my father and loved it, for all the colours and the sense of wonder it gave out with Anakin Skywalker as a boy going out into the world on an adventure. It appealed to my sense of enjoyment in life as a child of going out to the park and having fun with friends playing all sorts of different games and starting my own adventures.

Since then I have watched all the Star War movies, but the Phantom Menace was my first glimpse into the world of science fiction. Little did I realize at that time how much of an impact sci-fi would have on my life. It was the beginning of my journey so to speak! But one particular sci-fi movie made the biggest impact and was the first turning point in my life of growing up.

I have viewed a few sci-fi movies in my time like Star Wars, but Independence Day is the movie that I remember and have watched the most over the years.

I first saw this back when I was a teenager of about thirteen or fourteen. This was a time where I was beginning to really find my place in the world and understand a movie beyond the picture with the colours and explosions. It's a movie that made me feel more safe and secure in an increasingly chaotic world.

With it's obvious, but wonderful messages about uniting together and seeing past our differences to face a threat (in this case aliens) and great fun roles models that helped save the world.

They made me feel safe and at times of strife in my life was an important reminder that despite all our differences, we all need each other to get through challenges in life, facing them with friends and family at our side.

This was also the first time I came into contact with Star Trek (though I didn't know it at the time) through the excellent Brent Spiner who played Dr Okun!


As you know he played Data back in The Next Generation TV series, which had finished two years before, He who would go on to become a favorite character and inspiring role model for me.

This of course leads me onto the biggest influence (and still continues to be) in my sci-fi journey, Star Trek!

The first sci-fi TV show I got into through Simon and my father Chas was of course Star Trek, specifically The Next Generation with the movies and then the TV show followed by Voyager to start off with!

This has had the largest influence in shaping who I am today and how I tried to look at the world with a more objective eye with doing things I had never considered before including blogging and podcasting! Star Trek in essence is the exploration of one-self and how we can evolve to become a better human being!

The franchise also became the benchmark that led me to delve into other Science Fiction shows, the next being a franchise as popular and even longer running than Star Trek, and of course that is Doctor Who!

My first glimpse into Doctor Who, which formed my interest in it are those wonderful nemesis of the Doctors! I am of course talking about the Daleks!


I loved them from the way they looked to how they talked and said "Exterminate!" No, please don't exterminate me! I just like the way you guys say it and...anyway.

Soon after Simon encouraged me to delve myself into Doctor Who from the Christopher Eccleston/Billie Piper era, straight through to Peter Capaldi and Jenna Coleman!


I have watched most of the Doctor Who episodes from these two Doctors and David Tenant. But I still have most of the Matt Smith episode to watch (Seasons 5-7). What I love about Doctor Who is the notion of the Doctor living for so many centuries and traveling around in the TARDIS (A really cool way to travel!) and helping others from different periods of time. whether far in the past or million of years into our future!

It gave so much scope and possibility with all the different people and species the Doctor and his Companion encountered from all walks of time, which made the universe so open ended!


For me Battlestar Galatica (2004-2009) was the antithesis of Star Trek, whereas for the most part humans have achieved evolving and enlightenment and had found their place among the stars. BSG was humanity struggling to pick up the pieces after using machines (the Cylons) to enrich their lives. It backfired as they developed an intelligence and started a war against the humans for making them their slaves (like the Terminator franchise). Humanity was trying to find it place in the world by trying to find Earth, so they could begin again.


I loved watching BSG on Netflix for all on offering a edgier, more conflict aspect to the world in which human may inhabit in future. But like Star Trek it showed that we as all humans do make mistakes and have to continue to learn from them. Through struggles and times of strife whether with others or ourselves we all want to leave a lasting legacy in the world and learn what it truly means to be human. 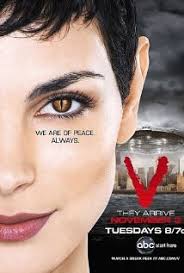 I have currently only watched the first season of what would only turn out to be two season series, which I think has been underrated. V had a lot of promise with an interesting premise of like Independence Day, aliens appearing on Earth, but making their “intentions” known of wanting to contact a new species and get to know and help them, whilst really infiltrating and planning to destroy human kind.


This was a sci-fi movie that I saw last year and like Star Trek gave a wonderful message of hope with humans having the potential to achieve with the characteristics they have.

Guardians of the Galaxy

This wonderfully fun, bizarre movie features a group of criminals who become unlikely heroes. I went to see this last year and had a whale of a time. With being not just it being a great summer blockbuster movie, it also has that great simple message, that some of us have it in us to change for the better for the wrongs we commit. It is possible for those who lose their way to come back again and make a difference for their past mistakes.

So that it's Treksters with my sci-fi background. I hope you enjoyed reading and gained some insight into what the world sci-fi has done for me, until next time...

This is Jamie from the Engage Podcast warping off into the unknown! Punch it!