The Benefits of Classical Music.

Hi everyone! This blog topic is an unusual one for me as I know zilch about classical music (there I said it!). I couldn't tell you any of the famous composers through history or the pieces they have produced. It's like a foreign language to me. I know it exists, I just haven't learned it.

Sure I had tuned in before (pun intended) and heard snippets on car journeys when I was younger. I know that my dad occasionally listened to it and I've heard people talking about it. But like other things back then it passed me by.

However within the last couple of weeks, on a few occasions, I have found myself listening to the radio station for classical music (100.9 MHz) on my phone. I did this as I couldn't sleep. So I began trawling through the frequency and found this. I was then struck (as I began drifting off to sleep) how relaxing and soothing it was to my ears, which brings us nicely onto one of the first of three benefits.

1. It's relaxing and could help you sleep!

Crew members from the Enterprise D do this! Captain Picard and other members of the crew have gone along to ten-forward in the evening to listen to Data and other crew members play classical recitals to enjoy and relax after their duty shifts! For example in the episode In Theory (S4, EP 25) or Sarek (S3, EP 23).

And I'm sure you've all had that. You've had an exhausting and sometimes rubbish day at work and all you want to do is get home and be with the family and kick back with a drink, (I'll use wine as the stereotypical example!) with a good book or in certain cases for some of you, listen to classical music.

Now classical music has different tones and vibrations like any music, it can be fierce and fast (which might relax some of you, but not for me!) or slow and gentle. Sophie Johnson, an ehow contributor online states that scientists have studied how listening to classical music affects the brain and they have discovered "it has beneficial and constructive effects."

This is partly due to dopamine, a chemical being released in the brain, that among other things allows to feel pleasure and affects moods and states, such as relaxtion, which in a very relaxed state make us drift off to sleep.

Or known more as the so called Mozart Effect conducted originally in 1993 by Rauscher, Shaw and Ky. They and other scientists have claimed that while subjects were listening to Mozart, they gained a temporary increase in IQ, making them more intelligent! Apparently this lasts for only about 12 minutes.

However I should point out that this study is not 100% conclusive as only some scientists have been able to replicate the original findings, whilst others haven't. This has made the study dip into conteroversy, as also some have claimed the increased intelligence comes from the enjoyment of listening to the music, not the actual music itself.

On the other hand this could partly explain why students from school, college and university do better on exams than they expect as they listen to classical music whilst revising. This also helps them to relax and focus more! Thus they do better! 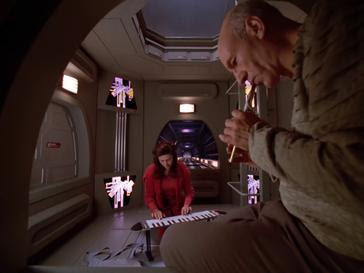 3. It affects mood, emotions and can have positive impacts on relationships!

According to Sophie Johnson, classical music is like telling a story, with different sounds and tones that evoke emotion and mood within us all. It offers us increased rewards of not just enjoyment listening to it and possible spurts of increased intelligence, it can also help forge and hone relationships between friends, family or loved ones.

For example on many radio stations, those that play classical music or otherwise, I'm sure some have you have sent in requests for songs to be played dedicated to a loved one. This can be either generally or on special occassions such as birthdays, wedding anniversarys or valentines day.

Classical music help forged the relationship in The Next Generation between Captain Picard and Lt. Commander Darren, head of stellar cartography in the wonderful episode Lessons, (S6, EP 19). Intially Picard sees Darren playing a classical music piece on piano in ten-forward at a recital. He reveals he plays a Resican flute he was given in the episode The Inner Light (S5, EP 25).

Soon they start playing music together (see picture above!) as their relationship grows. Both episodes mentioned are amazing, so if you haven't already watched them, check it out!

These are just three benefits of listening to classical music, though there is undobutedly more, and even now in the 24th century for those like Picard and Data, music whether classical or otherwise, will always continue to endure!

Also check out this link Simon sent me, Ex Astris Scientia, a Star Trek database that has a section on classical music!