The Engage Podcast's Guide to a Trekkie's Christmas List! What to buy a Trekkie for Christmas!!! 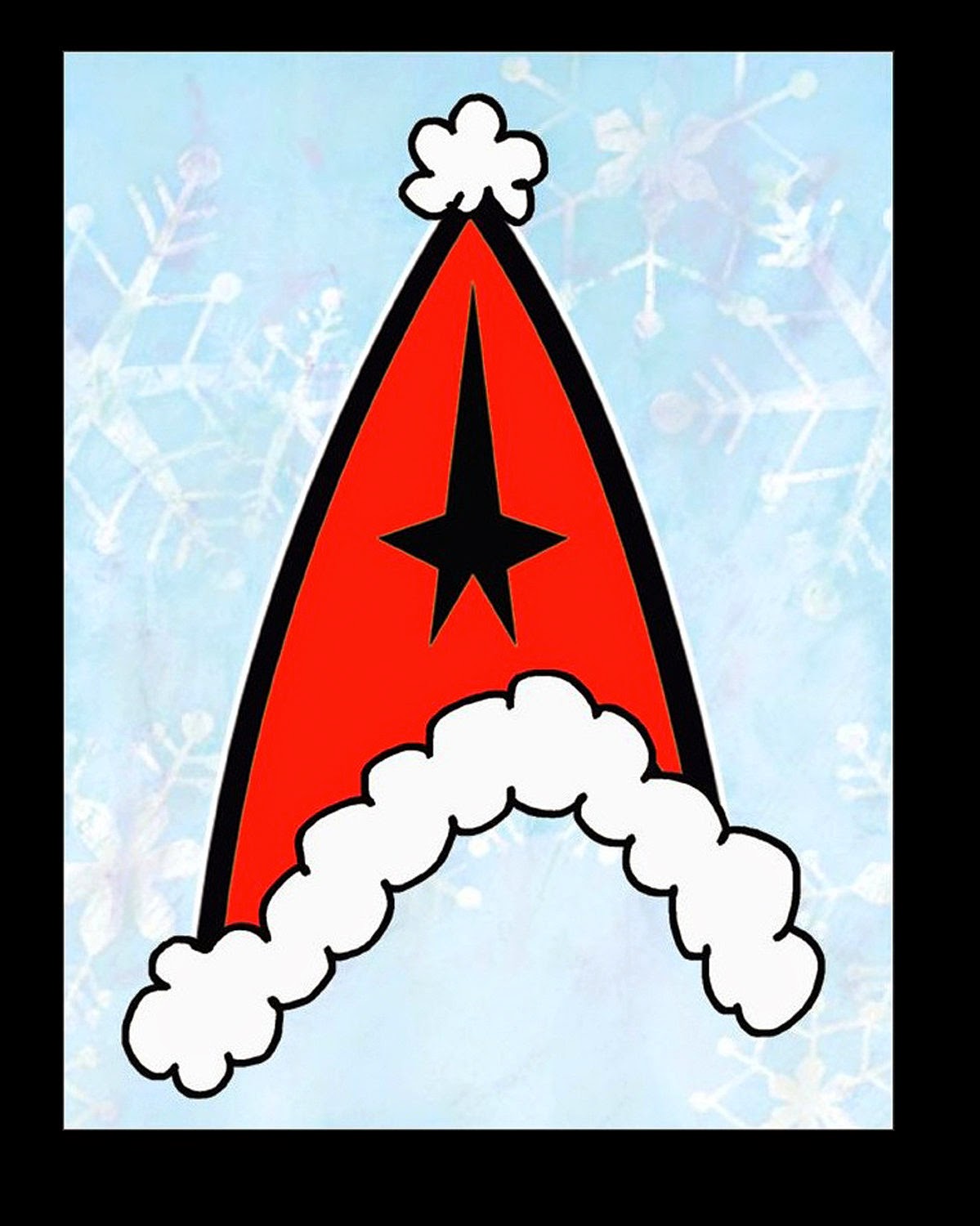 Hi guys, with Christmas just around the corner I thought I would take this opportunity to explain what sort of Star Trek related presents you can get for the Trekkie (or Trekker) in your life!

Ranging from small Stocking fillers (or Secret Santa presents) to the really extravagant presents...that every fan would love to get for Christmas (myself included)!

There will also be suggestions for the new fans of the franchise, as well as for the old devotees! I will also recommend a book idea for all my fellow starship fans. Finally I'm also going balance the guide out by proposing a 'Wild Card' present, which I think all Star Trek fans will appreciate getting in one way or another!!!

The first set of present ideas are great to give to a fan as a Stocking filler or as a Secret Santa, as they
are inexpensive and show that you have put a bit of thought into their stocking or Secret Santa!
As you can see there are four presents I would recommend buying in this category.
The Phaser & Enterprise Kits can be given to someone so that they can 'add' an element of Star Trek to their work desk, whilst the Quantum Mechanix Keychain is a great miniature representation of the infamous starship (for its size ), making it a fantastic addition to any set of keys.
﻿

The last set of ‘presents’ I would recommend are the badges made by FanSets. The devotion to detail they put into their MicroCrew & MicroFleet collections is astounding for their size and quality of each and every badge.
Without a doubt a must for any Star Trek fan, and well worth a buy!
Making them my Product of the Year!!!

New fan
﻿
For new fans to the franchise I am going to recommend a couple of books (and comics) for both ('Prime' and 'Kelvin Timeline') Universes. All of the presents in this category are meant to give the receiver a better understanding of both universes.


With that in mind, I'm going to start off with the 'Prime Universe'. The first book I would recommend is the Star Trek: The Visual Dictionary, as it gives the reader a clear guide to 'Prime' cosmos.
The second book I would suggest is Beyond the Final Frontier, which pilots a new fan through all the episodes in 28 out of 30 season of the Star Trek series! Making it a great addition to any collection!!!

For the 'Kelvin Timeline' I'm going down a similar path by suggesting the Countdown omnibuses and the Star Trek Nero omnibus, as they will give the reader more light on that universe. By preceding the Star Trek '09 and Star Trek Into Darkness films.

Old Fan
﻿
For the old fans I would suggest doing a bit of  'reconnaissance' before buying one of these presents, as the Trekkie in your life may already own either one or both of my suggestions in their collection. If this is the case then consider buying my 'Wild Card' present suggestion!
﻿

My first present idea for an old fan is the Star Trek Encyclopaedia. This (newly updated) reference book is the main staple for any Star Trek fan in my opinion. As you can imagine it has information on characters, planets, starships, food and countless other topics covering both universes (‘Prime’ Universe & ‘Kelvin Timeline’) right up until the ‘Kelvin Timeline’s’ Star Trek Into Darkness (2013).

A book which is on my Christmas List for this year!

The second book I would recommend buying is Star Trek Federation: The First 150 Years (Hardcover) book. As it gives an interesting look at the beginnings of the Federation by presenting the information in a very innovative and thoughtful way. Which is achieved by been written from the point of view of a 24th century historian!

Starship fans
As I've said on more than one occasion I am a complete and utter starship geek! Which is why I wanted to indulge myself in this blog post by suggesting a present for starship devotees like myself. The book I would buy is the Star Trek Starship Spotter, which is filled with 30 fully illustrated starships from multiple species and races including the Federation, the Klingon Empire and the Romulan Star Empire to name a few. The book also makes use of the CGI models, as well as the construction histories and technical data for each ship!
Just like I said for the old fan make sure you doing a bit of  'surveillance' before buying this present, as the person you're buying for may already own this in their collection.
I say this as starship fans (myself included) tend to buy every book associated with the subject, making it frightfully difficult to buy for! If this is the case then I would contemplate buying the 'Wild Card' present.
'Wild Card' present
If so far you've been uninspired by my present suggestions, then make sure you check out my 'Wild Card' present proposition...as I think it's the quirkiest present on my list! Meaning that if you give it to the Trekkie in your life they won't expect it at all, which if you ask me is the best kind of gift you can receive at Christmas!!!
The item I have selected for this section is Star Trek: The Art Of Juan Ortiz (Limited Edition Hardcover), as the book is just so amazing...and fun! The reasoning behind this is because it is a compilation of Juan Ortiz's artwork for all 80 episodes in the Star Trek: The Original Series.
Each episode has it's own unique piece of artwork, which perfectly symbolises the events on the show. Juan Ortiz also talks you through each design through an accompanying paragraph. Its a book you can tell has been thought through thoroughly from start to finish!
The Star Trek: The Art Of Juan Ortiz has been produced in two ways. The first is the 'normal' (unsigned) book, which would make a great present...but I would recommend (if your budget allows) spending a little bit more on the signed edition of the book.

As it has been personally signed by Juan Ortiz himself on the signature sheet at the beginning of every book, which also features concept art of the 'Enterprise Incident'. The book also comes with a 'Space Seed' art print also signed by Juan Ortiz.
Make sure you get them the signed edition of the book as it is limited to 500 copies worldwide, so I would recommend ordering one as quickly as possible!
Expensive presents
Lastly I'm going to give you a couple of suggestions for the expensive presents, which every fan would love to get their hands on!
My first suggestion actually gets mentioned (by Jamie) in the News section on our Star Trek 3 discussion podcast.
Jamie was of course talking about The Wand Company’s release of the Star Trek Original Series Phaser Universal Remote Control. This 1/1 scale screen accurate replica of a Type II phaser mixes the functionally of a regular remote control with the style associated with the sixties classic!
Making use of infrared (IR) combined with advanced gesture recognition technology the phaser is capable of controlling the majority of home entertainment systems around the world including TVs, iPod docks and DVD/Blu-ray players...and before you ask it can just be 'played' with it as its got 10 authentic phaser firing sounds (including Phaser Overload sequence), and 8 Starship Enterprise sounds!
But if your recipient get's a bit to "trigger happy" with all the sound effects, the remote is capable of being put into 'Silent mode'. If that's still not enough to stop the shenanigans then it can be locked with it's 'Four digit Personal Lock Code'.

﻿
My second idea for an extravagant present comes from the dead planet of Kataan, so you won't see many of these about! This 1/1 scale Ressikan Flute Prop Replica blends the 'look' and 'feel' of a real musical instrument with the screen accuracy you come to expect from the Roddenberry Entertainment.
This flute comes complete with a Prop Story and an autograph from Morgan Gendel. For all those unfamiliar with the name, Morgan Gendel was responsible for writing "The Inner Light" in which the flute appears.
In "The Inner Light", Captain Jean-Luc Picard encounters an alien probe that allows him the chance to experience an alternate life. In his alternate life he is a man called Kamin, who lives with his wife on the thriving planet of Kataan. Where one of his hobbies is playing his flute. But once Kamin has lived his whole life on Kataan, the probe shuts down and he awakens on the bridge of the Enterprise...once again he is Jean-Luc Picard (with his memories created on Kataan intact). The probe is brought aboard the Enterprise to be examined, and Picard is once again reunited with his flute!
﻿
If the Trekkie in your life loves Star Trek: The Next Generation, then this is definitely worth considering!!!

I just want to make a quick note to any of my friends or family that have read this. Unsurprisingly I already own everything on this list...except for the last two present suggestions!
This is Simon from The Engage Podcast signing out!
Merry Christmas!!!
Posted by Simon Cordell at 16:58